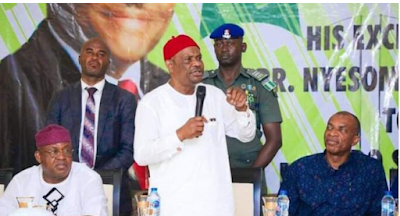 Nyesom Wike, governor of Rivers, on Thursday, paid a visit to Edo state to “consult” with stakeholders of the Peoples Democratic Party (PD…

Nyesom Wike, governor of Rivers, on Thursday, paid a visit
to Edo state to “consult” with stakeholders of the Peoples Democratic Party
(PDP) on his presidential bid.

However, unlike in Benue where Samuel Ortom, the governor,
was present when Wike announced his presidential bid, Godwin Obaseki, governor
of Edo, was absent at the meeting which held in his state.

It is not clear if Obaseki’s absence at the meeting was
linked to the recent heated exchange between the two over the threat by Philip
Shuaib, deputy governor of Edo, to leave the party.

Meanwhile, Obaseki had participated at an event held on
Thursday to unveil housing units constructed by the federal government in Edo.

Speaking during his visit, Wike said his ambition was not a
pretext to negotiate for the party’s vice-presidential ticket.

“I’m not coming out to negotiate to be vice to anyone. I’m
coming out to contest for the number one position in the country,’’ NAN quoted
him as saying.

Speaking on insecurity, he said there needs to be more
efforts channeled towards intelligence.

“There is need to spend adequate money on intelligence to
avert insecurity in the country. You don’t wait to allow events to happen
before trying to tackle them.

“It, therefore, takes a committed leadership to ensure
adequate security in the country.”

He said if he wins the party’s primary, he has the capacity
to secure victory for the PDP in the 2023 presidential election.

“We must have a candidate who listens to the grassroots. I
have the capacity to face the All Progressives Congress in 2023,” he said.

“Give me the ticket
and have your confidence that we will take over power in May 2023. Don’t allow
anybody to disabuse your mind from voting for Wike. We cannot continue to give
excuses why we are losing elections.

“Leadership should not be a cabal thing.”

The Rivers governor also visited the palace of Ewuare II,
the Oba of Benin.

“I have come to Benin to talk to delegates of our party who
will be part of our national convention on May 28 and May 29. The way our
country has fared, Nigeria needs somebody that will see white and say it is
white and see black and say it is black,” he said in his address at the palace.

“If the PDP gives me
the ticket, I have enough experience to tackle Nigeria’s plethora of problems,
having been a local government chairman, minister of state overseeing education
and now governor.”

On his part, the Oba of Benin wished Wike well in his
endeavour.

“Wike is our son. We
love him and if I say so, I believe I am speaking on behalf of our ancestors,”
he said.

“We will keep praying for him so that he does not come
across anybody that will mislead him, mis-inform him and may he and his family
never come across harm.”