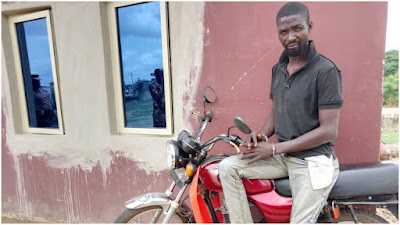 The Field Commander of the outfit, Amitolu Shittu, who confirmed the arrest to newsmen in Osogbo on Saturday, disclosed that Olagoke was arrested after stealing a motorcycle at Agbowu area of Iwo.

Shittu also revealed that it was in the course of carting away the motorcycle that the owner saw him and alerted the security outfit at its Iwo Command.

He also stated that immediately the Osun Amotekun operatives were alerted, they swung into action and apprehended the culprit.

Upon interrogation, Shittu revealed that the culprit confessed to the crime and explained that he had been indulging in motorcycle theft for a long time.

Olagoke also explained that he also steals other items and sells them to one Dayo Bello, who is also Iwo-based.

“He will be handed over to security agents for further investigation and prosecution,” Shittu concluded.