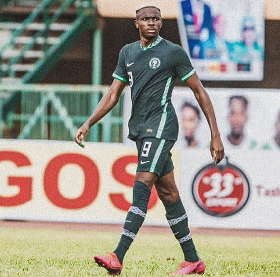 Napoli striker Victor Osimhen continues to be linked with a summer move to the English Premier League.

According to MondoNapoli citing today’s edition of La Gazzetta dello Sport, the Nigeria national teamer is being monitored by several clubs in the English top-flight, with Arsenal showing the most interest.

The Gunners are in desperate need of a striker in the summer following the departure of Pierre-Emerick Aubameyang from the Emirates in the January transfer window after he was stripped of the captaincy.

Current captain Alexandre Lacazette and Eddie Nketiah are out of contract at the end of the 2021-2022 season and they look likely to leave on free transfers in June as things stand.

Osimhen was on the wishlist of Arsenal in 2015 after winning the Golden Boot at the 2015 U17 World Cup but Wolsburg beat them to his signature.

The Ultimate Strikers product is having an excellent season at Napoli, scoring sixteen goals from twenty six appearances across all competitions.

Osimhen has approximately three years to run on his contract with Napoli, whom he joined from Lille in 2020 in exchange for 70 million euros.

All rights reserved. This material, and
other digital content on this website, may not be reproduced,
published, rewritten or redistributed in whole or in part without prior
express written permission from allnigeriasoccer.com