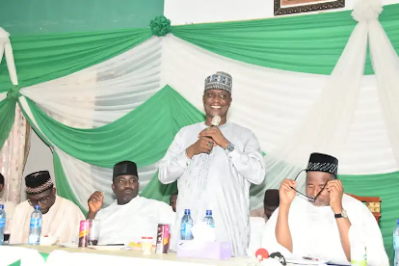 The Speaker of Bauchi State House of Assembly, Rt. Hon. Abubakar Sulaiman, on Saturday night, announced his defection from the All Progressi…

The Speaker of Bauchi State House of Assembly, Rt. Hon. Abubakar Sulaiman, on Saturday night, announced his defection from the All Progressives Congress (APC) to the ruling Peoples Democratic Party (PDP).

Abubakar, who is the chairman, Conference of Speakers of State Houses of Assembly, made this known during the Ramadan Iftar (breaking of fast) hosted by the State governor, Senator Bala Abdulkadir Mohammed, for PDP stakeholders from Ningi, Toro, Warji and Dass Local Government Areas of the State at the Government House, Bauchi.

The Speaker said that his decision to defect to the PDP was in recognition of the exemplary leadership style of Governor Mohammed and his commitment to transforming the State.

According to him, Governor Mohammed’s development strides endeared him (Speaker) to defect to the ruling party in the State.

Sulaiman then commended the governor for what he termed his (Governor Mohammed’s) ability to ensure harmonious working relationship between the executive arm of government and the State House of Assembly.

According to the Speaker, this was achieved by the governor despite the party differences, adding that the harmonious relationship between the two arms of government allowed for formulation and implementation of people-oriented policies and programmes in the State.

Reacting to the development, Governor Mohammed declared that it was a great honour done to him by the Speaker.

The governor said his administration chose to embark on developmental projects across the State with a view to providing the dividends of democracy to the people of the State instead of promoting corruption by sharing government resources among a few people.

He then solicited continuous support and collaboration with his administration, with a view to ensuring sustainable growth and development in Bauchi State.

Also speaking, the State PDP chairman, Hamza Koshe Akuyam, welcomed the speaker into the PDP, declaring that Sulaiman was one of the prominent politicians who joined the PDP.

According to him, with the PDP’s performance and ability, it would emerge victorious in the 2023 general elections in the State and the country in general.