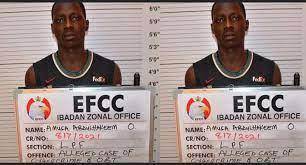 A final year student of the Tai Solarin University of Education (TASUED), Ijebu Ode, Ogun State, has been sentenced to 8 months of community service following his arraignment before a Federal High Court, sitting in Osogbo, Osun State.

The student, identified as Amusa Oluwasegunfunmi from the Department of Transport Planning Management TASUED, was convicted alongside Ajisafe Olaide, Lawal Morenikeji, Osuolale Abiodun, and Olamilekan Taofeek on Tuesday, June 21 following their arrest by the Economic and Financial Crime Commission (EFCC).

Delivering judgment, the presiding judge, Justice Ayo-Emmanuel stated that Oluwasegunfunmi is required to clean the toilets at the Ataoja School of Science, Osogbo, Osun State for a period of eight months as punishment for his fraudulent impersonation after pleading guilty to the crime.

The judge also ruled that the convict’s attendance register be kept and submitted upon the completion of his sentence.