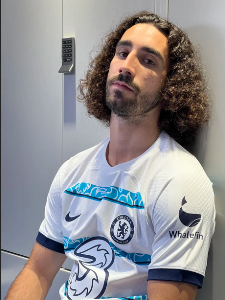 Spain international Marc Cucurella has signed for The Blues on a six-year contract from the Seagulls.

The Blues have pulled off a significant transfer coup to land the services of Cucurella, snatching him from under the noses of Manchester City who failed in their attempt to sign him as a replacement for Oleksandr Zinchenko.

Following reports from numerous media outlets this week, we can confirm an agreement has been reached with Brighton and Hove Albion for the signing of Marc Cucurella.

Cucurella put himself in the shop window after an impressive 2021-2022 campaign that saw him score one goal in thirty-eight appearances across all competitions.

The Barcelona-reared defender was voted Player of the Season by both Brighton supporters and team-mates.

The 19-year-old, an England U21 international, has been on the books of Chelsea since U9 level and spent the whole of last season on loan at Huddersfield Town, where he made 32 appearances in all competitions and got on the scoresheet twice.