Five secret steps Peseiro can take to build the Super Eagles into a top modern football team :: All Nigeria Soccer 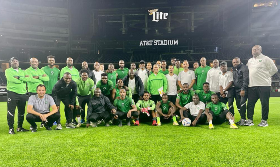 It’s a well-known fact that football is a global game which unites people from all walks of life, no matter their socioeconomic status, ethnicity, religion, or nationality.

There have been many changes in football over the years. In today’s world, things that worked well in the past are considered obsolete.

This is due to the emergence and continual improvement of new approaches to strategy, tactics, and management.

For example, defenders no longer primarily exist to prevent goals from being scored. Their roles have been refined and are expected to participate in the formation of play.

Fullbacks have already been divided into wing-backs and inverted fullbacks, and they are expected to play a significant role in the team’s attack, depending on the manager’s system.

If Super Eagles manager Jose Peseiro opts to take the modern route with his team, allnigeriasoccer.com will discuss five secret steps the Portuguese could take to achieve it.

1) Wide playmaker: The wide playmaker is the most valuable football position in the world. Neymar Jr., Lionel Messi, Angel Di Maria, and so on are some of the best players in this role.

The likes of Jadon Sancho, Callum Hudson-Odoi, and Bukayo Saka are among the many up-and-coming wide playmakers.

An excellent modern football team needs a wide playmaker who has the primary responsibility of creating chances in the wide areas.

Bear in mind that the flanks are the most difficult position to create from as it is less crowded but far away from the goal). Peseiro needs to scout for these profile of players.

2) Ball-playing defenders: Modern football no longer uses traditional defenders, so it’s nearly impossible to field a successful squad without at least two defenders who can play out of the back.


The ball must be moved up the pitch with pinpoint accuracy and efficiency for this to work.

3) Central Height: As a rule of thumb, it’s best to have an aerial presence in the middle of the field. It’s more likely that their opponents will take advantage of the opportunities in the air if there’s no aerial presence.

4) Progressive players: An excellent modern football team is built on a solid foundation of ball progression.

The ball must be moved up the pitch with pinpoint accuracy and efficiency by all players for this to work.

Footballers needed in this aspect of modern football need to be fast and athletic.

5) Forward movement : One of the most essential facets of any modern football team is the ability to make runs effectively in attacking zones.

Midfield players benefit greatly from the ability to move the ball forward because their opponents’ defenders are compelled to drop deeper to keep track of the attackers who are moving forward.