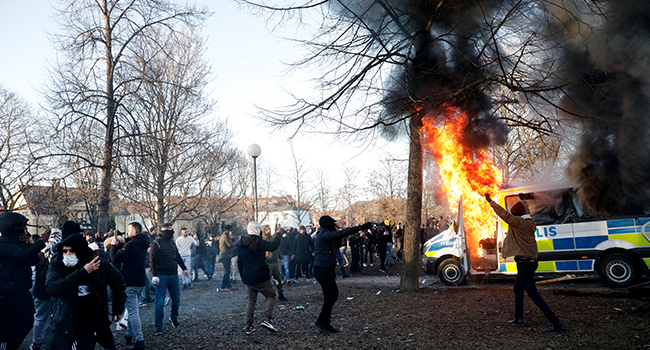 Police said in a statement that four police officers were injured with one of them, as well as a member of the public, being hit on the head by a stone.

It was the second day running that there had been clashes on the fringes of a rally by the anti-immigration and anti-Islamic Stram Kurs (Hard Line) movement led by Danish-Swedish Rasmus Paludan.

Three police officers had to be taken to hospital after a riot broke out in the city of Linkoping on Sweden’s east coast on Thursday, where a demonstration that included a Koran burning was planned. Two people were arrested at that demo.

“We live in a democratic society and one of the most important tasks of the police is to ensure that people can use their constitutionally protected rights to demonstrate and express their opinions,” national police chief Anders Thornberg said on Friday morning, reacting to Thursday’s events.

“The police do not get to choose who has this right, but must always intervene in case of violation,” he added in a statement.

Paludan has regularly been at the centre of incidents in recent years.

In November 2020, he was arrested in France and deported.

Five other activists were arrested in Belgium shortly afterwards, accused of wanting to “spread hatred” by burning a Koran in Brussels.