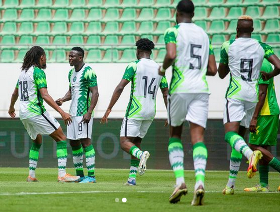 The Super Eagles demolished Sao Tome and Principe 10-0 in Agadir, Morocco, in the second matchday of Group A of the 2023 Africa Cup of Nations qualifiers.

And in doing so, the three-time African champions recorded their biggest ever win in international football, erasing a record that stood for sixty three years (10-1 vs Dahomey in 1959).

Three players who got on the scoresheet Victor Osimhen, Oghenekaro Etebo and Emmanuel Dennis have taken to social media to react to the record win.

The Napoli striker was instrumental in the destruction of the Island Nation, scoring his first senior hat-trick and an additional goal to take his tally to fifteen goals in 23 appearances for the national team.


Etebo fired his 20 -yard free-kick into the underside of the bar and into the net for Nigeria’s fifth ten minutes into the second half and Dennis dusted himself down and converted the spot kick he won to wrap up the scoring in the second minute of stoppage time.

See what Osimhen and Dennis posted on Twitter below :

Etebo wrote on Instagram : “Great Performance also happy to be in the score sheet”.