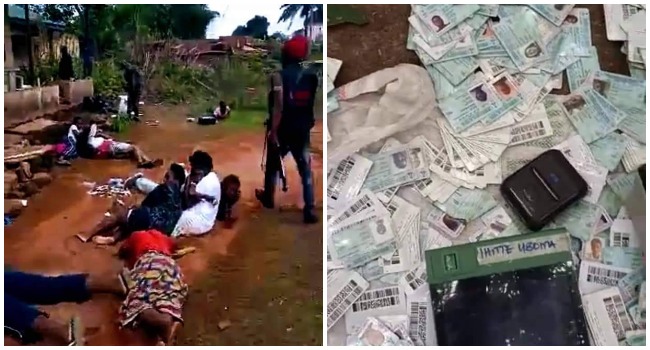 The decision was taken after an INEC staff was shot dead by gunmen, a statement signed by INEC National Commissioner, Festus Okoye, said.

Two other staff involved in the registration exercise at the polling unit are also missing.

Hear from the bandit himself & know who is Unknown Gunmen!

They attacked a registration center & killed one INEC officer for trying to register ndi Igbo for forthcoming Presidential election. Same gang will be carrying propaganda that ndi Igbo are marginalized. #sayno2killers pic.twitter.com/Eu47cL4hx4

INEC said it was making efforts to locate their whereabouts.

“The Commission extends its condolences to the family of Nwokorie Anthony and prays that God will grant them the fortitude to bear the loss. The incident has been reported to security agencies to unravel the circumstances that led to this unfortunate incident and bring the culprits to justice.

“We enjoin the President General of the various Town Unions in Imo State as well as all the critical stakeholders to protect staff of the Commission engaged in national assignment. The safety and security of staff is of paramount importance to the Commission, particularly with the devolution of the voter registration exercise beyond our State and Local Government Area offices nation in our determination to serve Nigerians better.”