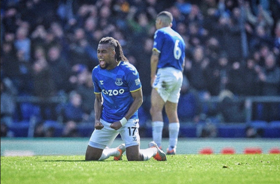 Alex Iwobi has overtaken Everton legend Yakubu Aiyegbeni in minutes played in the English Premier League after going the distance for the Toffees in Sunday’s 3-2 loss to Brentford at Goodison Park.

Iwobi has totaled 10,906 minutes spread across 181 matches in the top-flight, 80 minutes more than Yakubu.

Chelsea icon John Obi Mikel with 16,228 minutes is the Nigerian player with the most minutes accumulated in the Premier League, followed by Leicester City ace Wilfred Ndidi (14,191) and ex-Chelsea and Liverpool winger Victor Moses (13,392).

Only Watford striker Emmanuel Dennis (2,589)  has played more minutes than Iwobi (1,857) in this season’s Premier League amongst Nigerian players.

Under manager Frank Lampard, Iwobi has established himself as a key player, made evident by the fact that he has gone the distance in each of the last ten matches played by Everton for the first time in his Premier League career.

Against Watford last week, the 26-year-old moved ahead of Chelsea’s first African player Celestine Babayaro as the Nigerian player with the eighth most appearances in the Premier League.

All rights reserved. This material, and other digital content on this website, may not be reproduced, published, rewritten or redistributed in whole or in part without prior express written permission from allnigeriasoccer.com