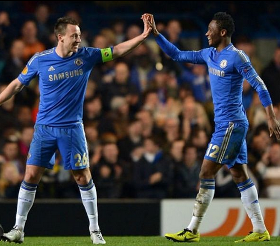 The official website of Chelsea has confirmed that former Super Eagles captain John Obi Mikel is the youngest player to reach one hundred Premier League appearances for Chelsea.

The world champions have clarified that Mason Mount, aged 23 years and 100 days against Arsenal, wasn’t the youngest player to reach a milestone of 100 games for Chelsea in the Premier League as three players achieved the feat before him.

Mikel went on to make a further 149 appearances in the Premier League before ending his association with Chelsea in January 2017.

Chelsea’s legendary captain John Terry is second on the list, making his 100th appearance a month beyond turning 23, in a 4-0 win over Leicester City.

In third place is a player of Nigerian descent, Eddie Newton, who reached a century of Premier League appearances 88 days after his 23rd birthday, while Mount ranks fourth.

All rights reserved. This material, and other digital content on
this website, may not be reproduced, published, rewritten or
redistributed in whole or in part without prior express written
permission from allnigeriasoccer.com