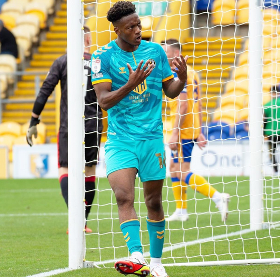 EFL League Two club Newport County have confirmed their retained and released list following the conclusion of the 2021-2022 campaign.

Including scholars and loanees, a total of twenty players are leaving the club and one of the players is onetime Nigeria Football Federation target Timmy Abraham, the younger brother of Chelsea academy product Tammy Abraham.

Timmy embarked on his fourth loan spell in British football last summer, joining Newport County for the whole of the season.

The 21-year-old has returned to Fulham and will now consider his options in the wake of the Cottagers sealing a return to the Premier League.

He has yet to make his senior debut for Fulham but has Football League experience, playing nineteen games combined during loan spells at Bristol Rovers, Plymouth Argyle and Newport County.

The striker appeared in seventeen matches in all competitions for Newport County, scoring three goals in cup competitions.

Timmy has been on the books of Fulham since 2017 after joining from fellow London club Charlton Athletic.