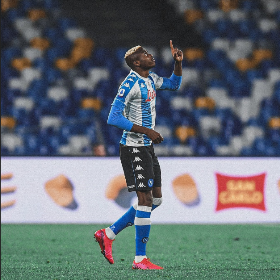 Victor Osimhen has pledged his future to Napoli amid widespread speculation linking him with a summer move to the Premier League.

It is known that the Nigeria international is on the list of players wanted by Newcastle United, while Manchester United and Arsenal have been credited with an interest, but he has hinted that any offers to leave the Diego Maradona Stadium this summer will be rejected.

Osimhen landed at Napoli from Lille in exchange for seventy million euros, making him the most expensive African-born player in history, and has gone on to score 27 goals in 60 all-competition appearances.

The Super Eagles striker has credited Luciano Spalletti for his form, saying the manager has helped him a lot to improve as a striker, and wants to continue working with him at Napoli even after the end of the season.

Speaking to Naples-based radio station, Radio Kiss Kiss, via Napoli Calcio & Mercato, Osimhen said : “A very big thank you to the coach, he has helped me a lot in so many areas of my game and of course having scored these goals is a big thank you to him and his technical crew.

“They have helped me a lot on and off the pitch making sure I am okay and I have the right frame of mind to go into each game.

“After training he advises me, sometimes he uses the ball, he uses his mouth, and to be able to learn from a top professional coach just like  Luciano Spalletti is a big honour and a big pleasure for me to call him my coach and my boss.

“I am looking forward to a lot of years with him.”

Napoli achieved their primary target of qualifying for the 2022-2023 Champions League and Osimhen is looking forward to playing in the competition in the colours of Gli Azzurri.

“It’s a great honour, we are really happy to be in the Champions League and to be able to be featuring in the biggest competition in Europe.

“And of course some of the fans are happy, as a team we are really happy, we reached the target this season. For me personally I am really happy.”

The 23-year-old Osimhen has approximately three years to run on his contract with Napoli.