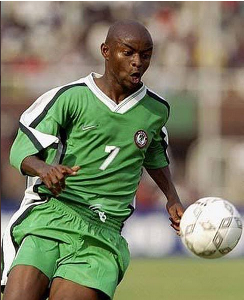 1996 Atlanta Olympics gold medalist Victor Ikpeba has revealed that the Nigeria Football Federation made the right call to appoint his former teammate Finidi George as one of the assistant coaches for the Super Eagles.

The NFF Executive Committee has approved the recommendation of the Technical & Development Sub-Committee for the incoming foreign head coach of the Super Eagles to work with Finidi as his second assistant.

Ikpeba believes that the current Enyimba coach deserves a chance to be among the Super Eagles technical crew and highlighted his pedigree during his playing days and coaching credentials.

Finidi won the UEFA Champions League with Ajax in 1994-1995 and was runner-up the following season, won the Eredivisie three times, and had Premier League and La Liga experience under his belt before hanging up his boots.

The 52-year-old holds a UEFA A License and previously worked at his former club Real Betis as director of international football.

“In football especially back home it is politics. Finidi George with due respect, with his pedigree as a former player, has played football at the highest level and had some experience some months with Enyimba,” Ikepba said on SuperSport’s Monday Night Football, monitored by allnigeriasoccer.com.

“Maybe the Nigerian Federation decided to give him a chance to learn from the manager, and eventually been taken as the manager of the Super Eagles.

“He’s like the second assistant. My worry is the Technical Committee had a meeting, we deliberated on this. The biggest problem of having so many coaches is personal interest, it is a catalyst for disaster.

“Finidi is a good call, you had Yobo before in the past. Yobo never had experience when they made him assistant coach to Gernot Rohr, I hope he has learned from Gernot Rohr. It’s an opportunity for Finidi to learn.”

The Nigerian Federation will announce a new foreign coach for the Super Eagles in the coming days to take over from Rohr who was relieved of his duties approximately one month before the start of the 2021 Africa Cup of Nations.

All rights reserved. This material,
and other digital content on this website, may not be reproduced,
published, rewritten or redistributed in whole or in part without prior
express written permission from allnigeriasoccer.com