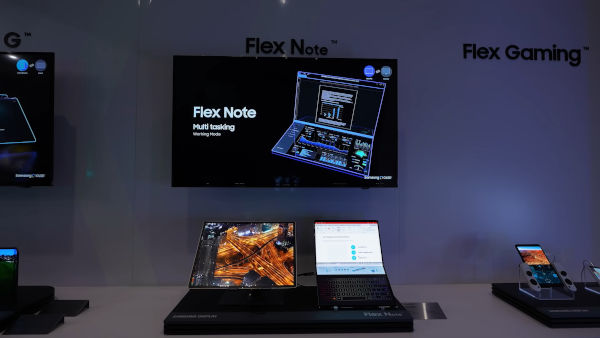 If we talk about folding displays and foldables, the first electronics manufacturer that usually hit our mind is Samsung. The reason is that it was the only manufacturer that brought folding smartphones to the mainstream global smartphone market with their Samsung Galaxy Z Fold and Z Flip series.

However, it seems that the company could look to innovate our mobile computing devices even further because during the SID 2022 Display Week held in San Jose California, USA last week, Samsung Display technologies revealed a brand new “Flex Note” folding display design that could bring foldables to the next level.

This report comes from Ice Universe, a well-known industry insider on Twitter, who had shared a tweet regarding Samsung’s brand new Flex Note design showcased at the event.

Samsung has also shared a few photos of the Flex Note designs via its online newsroom.

Looking at the photos, it seems that the Flex Note design resembles that of a folding notebook and tablet hybrid. It features the same design we see on the current Galaxy Z Fold series like the Z Fold 3, albeit with a bigger screen for laptop use. It seems that the device is running on Windows as well, as the Windows start Menu logo is shown in the bottom left corner of the device.

The notable feature of the design is that when unfolded, during media consumption, the keyboard can disappear to allow for more screen real estate when watching videos, something you are not able to do when using conventional laptops with hardware keys.

Another benefit of the design seems to be customization, as shown in the physical demos, users can customize the keyboard to be an RGB keyboard, or a younger pastel colored one, with a simple walkthrough of the settings menu. 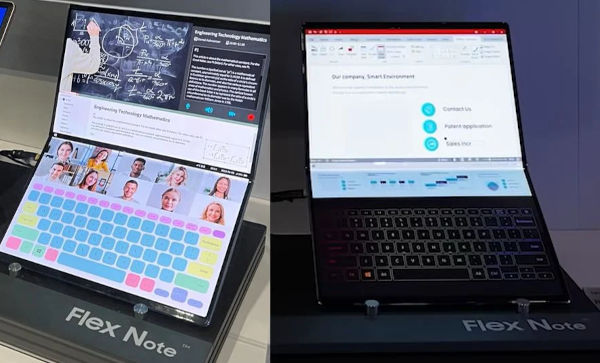 Compared to Samsung‘s current foldables, this Flex Note design showcased during the event features a much thinner chassis, despite the screen being much larger. Truly an impressive feat by Samsung.