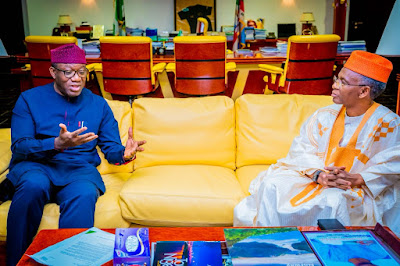 Kayode Fayemi, governor of Ekiti, says he and his colleagues will continue to support the efforts of the federal government towards tackli…

Kayode Fayemi, governor of Ekiti, says he and his colleagues
will continue to support the efforts of the federal government towards tackling
insecurity.

Fayemi spoke on Friday when he paid a visit to the Kaduna
government house to commiserate with the state over the recent train attack.

Eight people were killed, others injured while some persons
were abducted when gunmen opened fire on a train in Kaduna on March 28.

Speaking on the incident, Fayemi, who visited the state with
Abubakar Badaru, Jigawa governor, on behalf of the Nigeria Governors’ Forum
(NGF), said efforts will be channeled towards restoring peace in Kaduna and
other states witnessing attacks.

According to a statement by the NGF, Fayemi described the
attack as “mind-boggling”, and wondered if the crime was the handiwork of
enemies of Kaduna or people working to distract the governor from his efforts
on bringing development to the state.

“I agree that we as governors must join hands with the
president to deal ruthlessly with the bandits, that they be crushed, as you
have always advocated,” he said while addressing Nasir el-Rufai, governor of
Kaduna.

“We are here to commiserate with you, your government and
the people of Kaduna state, to show solidarity with them and align with the
governor, who as a public servant all his life, has been a focused leader from
who we must learn, to ensure peace in our communities.”

Also present during the visit was Hadiza Balarabe, deputy
governor of Kaduna.