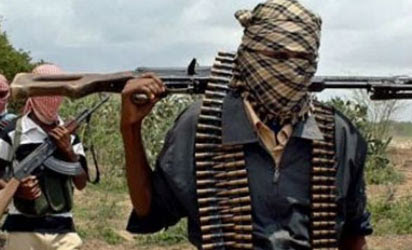 An official of the Independent National Electoral Commission (INEC) was killed on Thursday when gunmen attacked a polling unit where the Continuous Voter Registration was being held.

The INEC spokesperson, Festus Okoye, who confirmed this in a statement identified the victim as Anthony Nwokorie. He said two other staff of the commission involved in the registration exercise at the polling unit were still missing after the attack.

It can be recalled that the commission had suspended the registration exercise in the local council area following the attack.

A video clip of the attack, which was shared on various WhatsApp groups and a twitter handle, has revealed how the gunmen attacked the officials and residents of the area who visited the polling unit for registration.

In the video clip, seen by NigerianEye (Shared above), the gunmen ordered the officials and the residents to lie down while they shot indiscriminately. They were heard issuing warnings that the INEC registration exercise should not be held in the area.

“As you can see, these are the stupid people we are fighting for to have their freedom. (But), they are here planning for election,” one of the gunmen was heard shouting in the clip, apparently referring to the INEC officials and the residents, who are mainly of Igbo ethnic group of South-eastern Nigeria.

“Today is 14th of April, we have sent warning to you people. We don’t want any election. No more elections. No more voter cards. Do you think we are here to joke?” he queried panic-stricken residents while wielding a rifle.

While he was talking, two other gunmen fired multiple gunshots at one of the people lying on the ground, believed to be the INEC official who was confirmed killed in the attack.

In the one minute and fifty-one seconds video, we counted 13 people, including a child, lying on the ground during the attack.

They were heard begging the gunmen to spare their lives.

The video clip is believed to have been shot by the gunmen.

One of the people, on seeing that one person had been shot dead by the gunmen, summoned courage and fled the scene.

“Heeh, Heeh! Come back here!!” the gunmen shouted as the young man continued running without looking back.

“Idiot. Bastard!” one of the gunmen thundered as he saw the young man had finally escaped.

The gunmen, numbering about five, and wearing masks, picked INEC registration materials and spilled the contents. Some computer parts littered the ground and seats being used for the exercise were also scattered.

“Look at them. This is their box,” one of them said as he spilled the contents.

“Next time, we are going to set this place ablaze,” the gunmen warned.

Attacks by armed persons have increased in the South-east in recent times. The attacks often target security agencies and government facilities.

The Indigenous People of Biafra (IPOB), an outlawed group, has been linked to the deadly attacks in the South-east. But the group has repeatedly denied their involvement in the attacks.

IPOB wants an independent state of Biafra to be carved out from the South-east and some parts of the South-south Nigeria.

The leader of the separatist group, Nnamdi Kanu, is currently detained in Abuja where he is facing trial for treason.